An Exemplary Cooperative Since 1981

Alvarado Street Bakery became a workers-owned cooperative in 1981. Yes, that is over 35 years ago! Since our inception, we have been seen as an example for other businesses which contemplate becoming a co-op. Our highly functioning co-op has been featured in countless articles, websites, interviews, and even documentaries. Each worker receives one share in the cooperative and has an equal vote on business matters, including employee benefits, salaries and the reinvestment of profits. This is definitely a unique way to run a business. At Alvarado Street Bakery, we believe this is the human way of running our bakery.

What is a cooperative?

A cooperative (or co-operative) is an autonomous association of persons united voluntarily to meet their common economic, social, and cultural needs and aspirations through a jointly-owned and democratically-controlled enterprise.
(Source: ICA Statement on the Cooperative Identity)

A cooperative is a business voluntarily owned and controlled by its member patrons and operated for them and by them on a nonprofit or cost basis. It is owned by the people who use it.
(Source: UWCC)

What are the values of a cooperative?

Co-operatives are based on the values of self-help, self-responsibility, democracy, equality, equity and solidarity. In the tradition of their founders, co-operative members believe in the ethical values of honesty, openness, social responsibility and caring for others.

What are the principles of a cooperative?

The co-operative principles are guidelines by which co-operatives put their values into practice.

Co-operatives are voluntary organizations, open to all persons able to use their services and willing to accept the responsibilities of membership, without gender, social, racial, political or religious discrimination.

Co-operatives are democratic organizations controlled by their members, who actively participate in setting their policies and making decisions. Men and women serving as elected representatives are accountable to the membership. In primary co-operatives members have equal voting rights (one member, one vote) and co-operatives at other levels are also organized in a democratic manner.

Members contribute equitably to, and democratically control, the capital of their co-operative. At least part of that capital is usually the common property of the co-operative. Members usually receive limited compensation, if any, on capital subscribed as a condition of membership. Members allocate surpluses for any or all of the following purposes: developing their co-operative, possibly by setting up reserves, part of which at least would be indivisible; benefiting members in proportion to their transactions with the co-operative; and supporting other activities approved by the membership.

Co-operatives are autonomous, self-help organizations controlled by their members. If they enter into agreements with other organizations, including governments, or raise capital from external sources, they do so on terms that ensure democratic control by their members and maintain their co-operative autonomy.

Co-operatives provide education and training for their members, elected representatives, managers, and employees so they can contribute effectively to the development of their co-operatives. They inform the general public - particularly young people and opinion leaders - about the nature and benefits of co-operation.

Cooperatives Co-operatives serve their members most effectively and strengthen the co-operative movement by working together through local, national, regional and international structures.

Co-operatives work for the sustainable development of their communities through policies approved by their members.

What is a Worker Cooperative?

Worker Cooperatives, like Alvarado Street Bakery, are a form of business ownership where the employees or workforce in a for-profit enterprise directly own and control the business on a democratic basis of "one person, one vote." Typically all workers, including management, are eligible to be member owners after meeting the requirements of a probationary period of employment and paying a designated membership fee.

In a worker cooperative, ownership and control of the business derive from working in the company, rather than from simply investing capital in it. A central element of this business structure is that labor uses (employs) capital, rather than capital using (employing) labor. The standard worker cooperative model prohibits non-workers from holding membership voting shares, thus retaining control of the firm within the workforce.

Profits and losses from the business are allocated to worker-owners according to either the hours worked or gross pay. Skill and seniority determine wage rates, which are often set in conjunction with an internal policy establishing an equitable ratio between the highest and lowest paid levels.

What are some advantages to being a Worker Cooperative?

The worker cooperative structure has many advantages, especially for a relatively small business serving a local market. They are:

Worker cooperatives provide a simple, viable ownership structure for businesses that want to capture and build on the entrepreneurial drive of all the participants and distribute the fruits of ownership equitably to them. Today there are hundreds of successful worker cooperatives in operation across the country in such industries as home health care, furniture manufacturing, printing, apparel, farm labor contracting, optical coating, plywood manufacture, child care, metalworking, food processing, taxi cabs, and many more. Alvarado Street Bakery incorporated as a worker cooperative in 1981 and has grown from its original 5 members to its present day level of 116 members. We are proud of the service we provide to the community, to our membership, and to our valued workers.

Special thanks to both the University of Wisconsin Center for Cooperative and the I.C.A. Group for the information provided above.

Ask for us in your preferred grocery store! 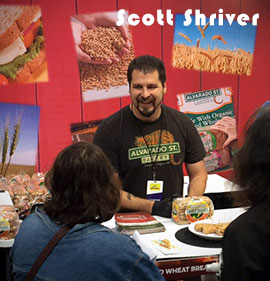 When Scott Shriver started in 2004, he knew this was going to be a long term career. As one of our Territory Sales Managers, he meets with lots of enthusiastic fans of Alvarado breads. His personal favorites are the California Style Buns, the Energy Squares, the Sprouted Sonoma Sun Bread, and the new Black Label Breads.

"I love it when I am in the field representing the co-op, and people come up to me to say they love our breads, and have been buying them for years. It feels like we are making a difference in people's lives." 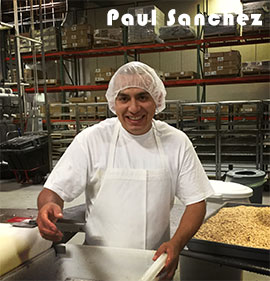 Paul Sanchez, an Alvarado worker since 2006 (in Mixing and Bread Production), says with a smile:

"The bakery is a family to me!" 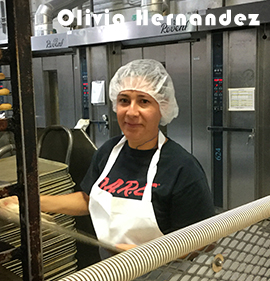 Olivia Hernandez has worked in the Production Line specializing in bagels since 2014 and, yes, bagels are her favorite Alvarado products.

"I work on the Bagel line. I very much like my work and the benefits that we have. I enjoy working here!" 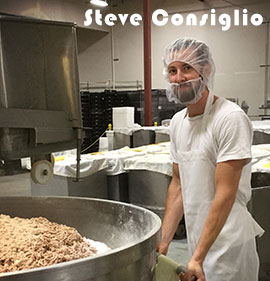 One of our Bread Bakers and Packaging workers, Steve Consiglio, explains why he started to work at Alvarado Street Bakery in 2014:

"I wanted to work at ASB because it is a socially responsible company and an excellent example of a worker co-op on a large scale. My favorite breads are the Sprouted Sonoma Sun Bread and the Sprouted Whole Wheat Bread!" 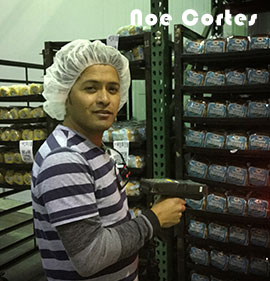 When Noe Cortes started in 2002, he knew this was more than a job. Noe ships truckloads and maintains inventory at Alvarado Street Bakery. His favorite product is the Sprouted Energy Squares and he says:

"I am very proud of the healthy products that we make."

Our bakery's mission is to give superior service in providing the finest quality baked-goods to our valued customers nationwide by utilizing a worker-owned and managed cooperative business structure and to strive to use whole grain and organic ingredients whenever possible, to support sustainable agriculture practices and healthy living.

Learn about our newest products, the latest news about our bakery, and more!