Back to all recipes » 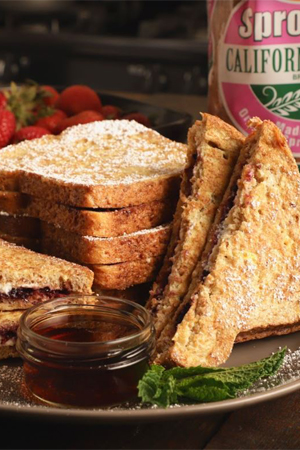 In a large mixing bowl, combine eggs, milk, vanilla & cinnamon. Set aside.
Assemble 5 sandwiches: spread ricotta cheese on 5 slices, and blackberry preserves on the remaining 5 slices. Press sandwiches together.
In a large skillet, heat the butter until melted, Dip sandwiches into the egg mixture and cook in the skillet (on both sides) until golden and crispy.
Sprinkle each sandwich with a dusting of powdered sugar, slice in half, and serve with maple syrup on the side for dipping.